The first Stauffer influenced Martins had a pearl pattern set in mastic on the rosette. This pattern was soon combined with these "moons" on the rosette.  The first pearl on the top border are semi-circles which are thought to be made from button blanks. In the 1840's we begin to see tiny diamonds in the rosette.   Approximately 11 examples of early Martins with pearl diamond rosettes are known to exist today, all of which follow one of three basic patterns.


The simplest pearl diamond rosette pattern consists of a three ring rosette with a single strip of diamonds in the center ring.

This jewel-like example has an unusual top border made of pearl diamonds in addition to the second variation of the diamond rosette, with an early use of solid pearl rings comprised of smaller blocks of pearl, surrounded by two rings of pearl diamonds. The third style of pearl diamond rosette follows the form of a traditional Martin three ring rosette with the center ring consisting of a 5 plies of ebony and ivory rings surrounded by two rows of pearl diamonds. This example also has marquetry on the sides adjacent to the ivory binding. This unusual example of an early version of a Martin guitar in the Style 30+ range, with a pyramid bridge with pearl pendant, fancy side filets, ebonized neck with ice cream cone heel, spruce lining, and a mature X brace, has a unique pearl rosette which may be the earliest variation of a solid band of pearl replacing the rows of tiny diamonds.

Martins first fancy pearl fingerboard and headstock inlays were on their mandolins.

The binding of the Style 5 mandolin is made of alternating blocks of genuine tortoise and pearl.

From the beginning of Martin's established models in the 1850's until 1902, the Style 42 was the most embellished guitar in the Martin line.  It was richly inlaid with pearl on all top borders, including the soundhole and the borders of the fretboard extension.

Until close to the turn of the century, no guitar in the Martin product line, including the Style 42, had pearl or other adornment on the fingerboard, or on the headstock.

The first Martins to have pearl inlays on the fingerboard appeared in approximately 1896, with inlays on three frets.

These early inlays have a delightful folk art appearance. 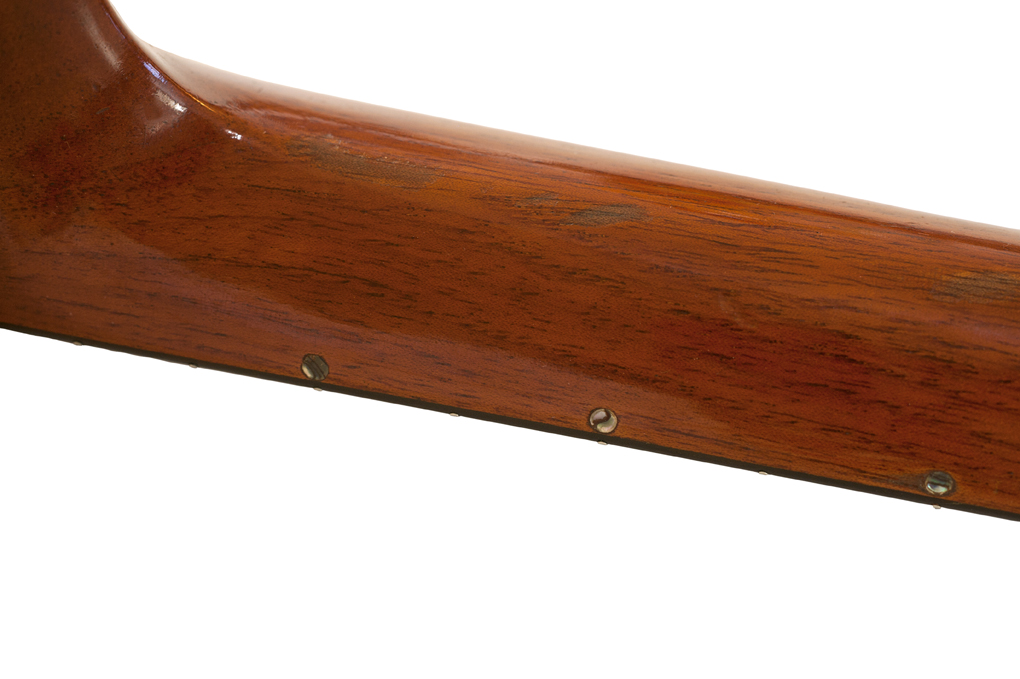 The Style 45 DeLuxe is the first and only production Martin guitar to have inlays on the pickguard.

The OM-45 DeLuxe is also the only catalogued Martin ever offered with an inlaid bridge, though these were common on many Chicago guitars.

The early Hudson Street Martin is one of a number of early Martins to have decorative ivory and pearl pendants affixed to their pyramid bridges.

The pendants are seen on Martins as late as the 1850's, as on the 1850's Martin with the interesting early pearl rosette: 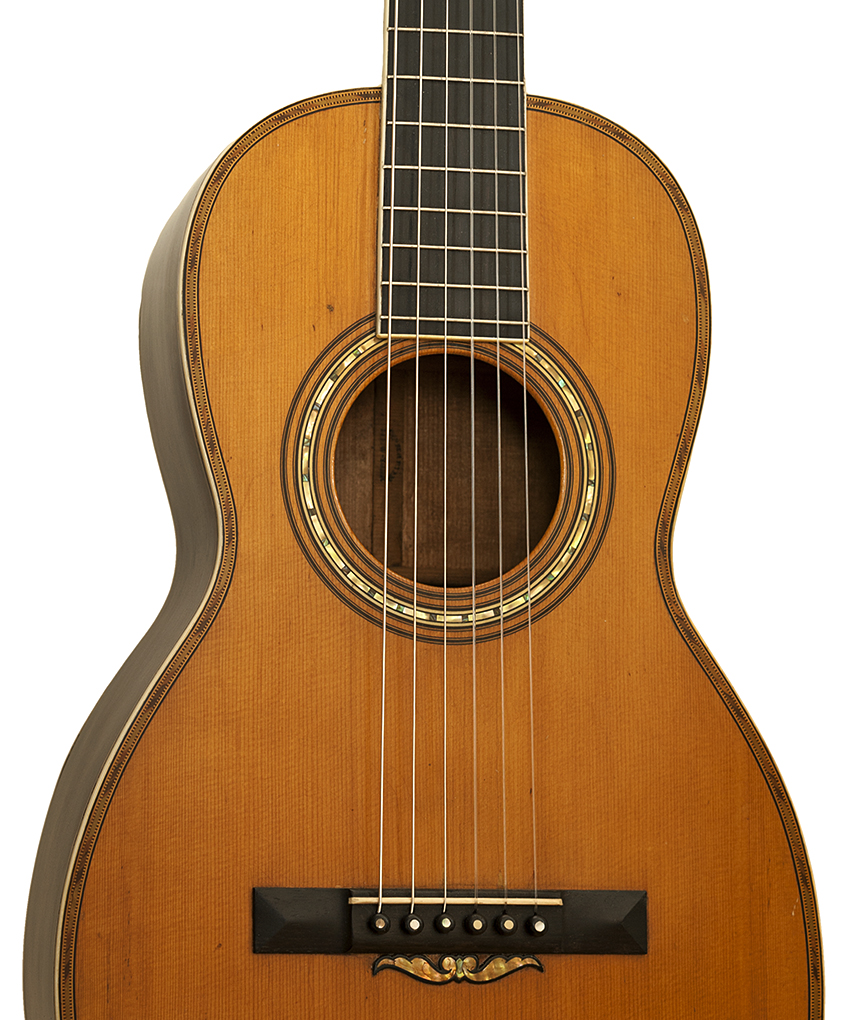 It's often said these days that Martin is a conservative company, who's instruments lack the glitz of many other makers.  You can see by the instruments above that Martin's roots include some pretty fancy instruments.

The Style 40 Martin was similar to the 42 with the except for the lack of pearl inlay surrounding the fretboard extension.

The Style 27 was the least expensive pearl inlayed Martin, with pearl on the rosette only.

The Style 30 also has a pearl inlayed rosette.  Here you can see a Style 27 with a Style 30, which appear to be nearly identical.  In fact, in some years, the only difference between the style 27 and 30 were the tuners, which were brass on the Style 27, and silver plated on the Style 30.

The Style 34 was similar to a style 30, with pearl rosette, but with the addition of an ivory bridge.


Here's a more unusual Style 34, with a unique wider band of pearl that we've never seen on another Martin.

In 1902, Martin was said to have built three custom ordered Style 42 guitars, labeled 00-42S, which were adorned with pearl on the back and sides in addition to the top.   This style guitar with added pearl trim was later adopted formally into the Martin product line, and called the Style 45.  Martin actually built two guitars with the same serial number, so four guitar were produced with added trim in 1902, three of which had a fancy tree of life inlay on the fretboard, and one of which had snowflake inlays closer to what would be seen on the production Style 45 Martins.

Style 45 Back and Side Borders


The Style 45 also has beautifully mitered pearl inlays on the borders of the back and sides and surrounding the end piece and the heel.

The version of the fern appearing on the first Style 45 prototype was used for several years.  This custom ordered Style 42 from 1902 was one of two to have this particular "fern" style headstock inlay, which in recent years has been copied and made available on certain custom Martin guitars as the "alternate torch"

The "fern" inlay was replaced on Martin Style 45 guitars by what has become known as the "torch" or "flower pot".

This first torch was replaced on Martin Style 45 guitars by a second somewhat simplified version of the "torch" or "flower pot", which was designed for the solid headstock on the 14 fret OM.

If You Have Questions or Suggestions About This Web Site or Vintage Martin Guitars: